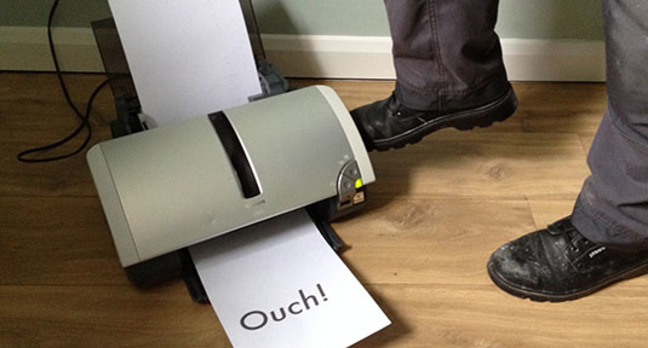 Seriously though, once you get to uni, the word ‘independence’ becomes a big deal. Whereas before, it was perfectly acceptable to scream ‘MUMMY!’ and run to the nearest dependable adult, at university, things change. (It’s a bit depressing really!) Suddenly, YOU are the adult and you get bombarded by nouns with the word ‘independent’ attached to them. Independent learner. Independent thinker. Independent life-manager. Want to know the craziest part? Being independent doesn’t come with an instruction manual. No one teaches you how to indepen-dance. You just do it.

But, what does it mean to be independent? And how do you learn to indepen-dance?

This brings me to this week’s little anecdote…

A while back, I attempted what seemed, at the time, to be death-defyingly impossible – nay, inconceivable! – and used a printer.

Now that I’ve told you my death-defying & impossible feat, it might not sound so death-defying or impossible. So, let me explain… First, printing at university is very different to printing at high school. Second, I’m one of those people who should not be allowed anywhere near a piece of sophisticated technology. Ever.

The story began in the library, when I wasn’t sure how to print without a credit card.  Thinking I needed help, I got onto the ‘ask a librarian’ page and asked a librarian.

“How do I top up my unicard account without a credit card?”

The answer I got from the librarian: “To top up your unicard account, use your credit card.”

In vain I explained that I don’t possess this all-important key to internet transactions. It was too late. The librarian had gone offline. (Probably to get a well-deserved coffee!) Deciding to embrace independence, I went to top up my card on the scary-looking top-up machine – all by myself!

This was where the trouble started. I told you I have a bad effect on technology – well, this was no exception! The minute I logged in, the unicard machine (which I’m sure was a trained extortionist!) refused to accept my money. Every time I fed it a five dollar note, the money was rudely spat back in my face. Even better, a queue of people was gathering behind me, waiting to top up their cards. So, my fight with the machine scored a live audience! After minutes of the machine regurgitating my money,  me running everywhere to catch my five dollars and the crowd behind me looking more and more annoyed, I cracked.

“Listen to me, you product of Satan! If you’re hoping to extort more money from me, you’re out of luck! I’m a wallet-empty HECS-debt-loaded student. I’ve only got five bucks and I have three massive readings to print – so, suck it up!”

The next step on my cataclysmic journey was to get the printer to work. This was no easy task.  It took me a record-breaking ten tries to get it to respond. This meant that everyone in the library got to watch their favourite first-year comedian do ten long laps between her laptop and the printer.

At last, the printer decided to cooperate – at least, for a minute. Then, it made a terrible inhuman noise… (Imagine a cross between ‘Alien’ and ‘The Lion King’ and you’ll get the idea!) There was a paper jam. *Cue horror movie music!*

By now, I could – and probably should – have renounced my mission and gone to get a librarian. Instead, being so independent, I tried to fix the problem myself. Following the instructions on the print-screen, I attempted to open the printer and clear the jam. Unfortunately, I opened the wrong side. As a result, part of the printer accidentally broke off in my hand. (It’s times like this where life should come with an undo button!)

Mortified, I tried to gauge the reaction of my audience. Were they laughing? Or were they about to report me for printer-directed vandalism? Neither. They contemplated me with bored expressions and got back to work.

By some miracle, I undid the damage and, after only five attempts, restarted the printer. It worked for a while. Then, obviously possessed by some malevolent demon, it made the terrible noise again and bingo: another paper jam! Once again, I set to work fixing it. What came out of the printer this time was a sheet of A4 so hot that it must have been torched by a fire-breathing devil. Ink had been printed all over it and it had been sliced into lots of little pieces.

I cursed the printer with every rude word I could think of and then looked at my fellow library-goers. Surely, my performance had earned at least a smile? No luck. They all stared at me in deathly silence. The boy behind me, in fact, looked like he was struggling to contain his irritation.

Still, I wasn’t beaten. Summoning up the last of my independent-mind-strength, I restarted the printer. Like something out of ‘The Exorcist’, it decided to purge itself of its hellish printer demons and vomited out all three of my readings in one belch. There was just one problem – the readings were all mixed up together and in completely the wrong order. (You see what I mean now about me and technology?)

There I stood, like an island in a sea of paper, bewildered and completely helpless. Not to mention, surrounded by gawking fellow students. Then, I heard a funny coughing noise… Turning around, I realised it was the boy behind me. He had finally caved in and started laughing. And  I don’t mean a small inaudible ‘LOL’. He was laughing so hard that he was in serious danger of wetting himself.

As an independent printer-user, I had flunked.

What’s the moral of the story, my faithful reader buddies?

It’s true that independence means sometimes going it solo. But, this doesn’t mean you have to do absolutely everything by yourself. Sometimes, you need help. In these situations, wherever you are, the best thing you can do is ask. If you don’t get the answer you’re looking for, ask again! Otherwise, you may end up in a mess.

And, if you’re anything like me, it will be an inky, papery, printery mess of epic proportions.

Nothing is worth such a mess. Not even the awkwardness of admitting that you might possibly have no idea what you’re doing…

DISCLAIMER: No people were harmed in the making of this blog post. The same cannot be said about printers.

One Response to “When Printers Attack! (Ode to Independence) [Aimee]”