Sugar Gliders are gorgeous creatures. I can’t tell you how many hours I’ve spent gazing intently into twilight foliage, straining to see the silhouette of these beautiful little animals as they launch themselves into the air. To have one of these gliders swoop overhead in fading light, arms and legs desperately stretched to control their rapid descent is a wonderful experience. Its the reward for all those mozzie bits, cold nights and inevitable sticks in the eye that one cops when delving into the world of these nocturnal canopy dancers.

But allow me to trash any romantic notion you might have about these innocent looking characters. Because these gliders are ravenous predators, they’ve developed a taste for one of Australia’s most endangered birds, the Swift Parrot, devouring adults and young in the nest. Their impact is so acute that Swift Parrots will be extinct within 20 years if Sugar Gliders continue their assault.

Yes, this glider is a deadly predator, eating live parrots and young in the nest.

Image by Matt Francey  with permission.

Swift Parrots are a stunning iridescent green parrots, they migrate from the mainland to Tasmania in Spring searching for nest hollows. I first fell in love with parrots when at around the age of 10 while riding my rusty BMX I caught a glimpse of a beautiful green bird. Not a Swifty but a beautiful little Purple Crowned Lorikeet in the creamy blossoms of a big slatey Spotted Gum.

This opened up a new world to me and I soon discovered proud little Red Rumped Parrots strutting in the grass at my local park, and the creaky door chime of Gang Gang Cockatoos in a Hawthorn hedge at my cousins farm. Rare and unusual parrots like the Swift Parrot remained an enigma in my suburban childhood.

All I knew was that Swift Parrots were incredibly fast and rare and that I’d probably never see one. I looked around but none could found, I lived no where near the gnarly old ironbarks and blue gums they so desire. 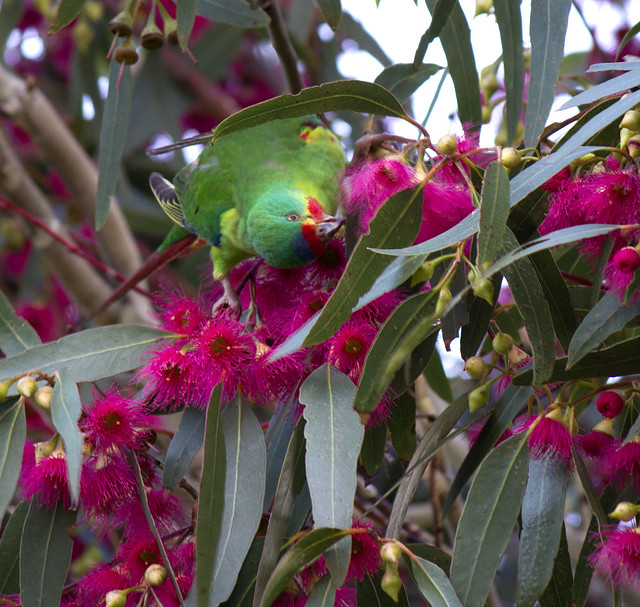 It wasn’t for another 20 odd years that I first saw a Swift Parrot, it was late one evening in the crunchy dry ironbark forests of central Victoria. Ironically I was helping find sugar gliders with an old uni friend when a small group darted overhead. We were elated to see Swifties, we knew they were rare creatures and their decline was poorly understood. Was logging the cause, or tree dieback in rural areas resulting in less breeding hollows? Or something else?

Little did we know that a sad and fatal connection between these species was being played out in Tasmania’s Blue Gum forests. Back then no one understood that Sugar Gliders, apparently new arrivals to Tasmania, introduced in the past 150-200 years, were wreaking havoc on Swifties. It just seemed like another classic story of decline, an enigmatic species slowly going backwards, a bunch of possible scenarios, no solid explanation, little research, no money. It was Dodo land for Swifties.

Our understanding of the threat that gliders pose has only come to light in the past few years. Research by Dejan Stojanovic at Australian National University Canberra has provided the evidence that Sugar Gliders are largely responsible for the current decline of Swifties.

Motion detection cameras show sugar gliders entering active Swift Parrot nests with follow up inspection revealing that adult bird and any young or eggs have been devoured. 100% mortality can be the result. Predation is highest in fragmented habitat with few hollows. Urban development, logging and loss of large old trees in agricultural landscapes have all played a role in the decline of large old hollow bearing trees. Nest boxes have been deployed in some areas and Swifties will jump at the chance to use them in a hollow depleted sites but they’re still vulnerable to nocturnal attack.

Hope for the future

Dejan has thought deeply about this issue and may have a part of the solution. His idea exploits the nocturnal nature of gliders to exclude them from nest boxes. A light sensitive door closing mechanism automatically shuts at dusk and opens at dawn so gliders are excluded. Swift Parrots are safely ensconced, free from predatory harassment. Operation Possum Keeper Out is underway, and you can help out by contributing to Dejans work here.

Lets hope that Dejans approach will lead to a successful breeding season for Swifties this year. It is a labour intensive approach but possibly the last option for Swifties unless the public supports the control of Sugar Gliders in Tasmania. I’ve spent a lot of time admiring the beauty of Sugar Gliders but I’d rather see the controlled management of this common, widespread ‘introduced native’  than the extinction of Swift Parrots.

I hope that the next generation of kids riding their bike past a towering flowering Eucalypt can experience the sense of awe and amazement that I did when I first came a cross a Purple Crowned Lorikeet. And that they still have the opportunity to see a Swift Parrot dart by 20 years later.

The final of a four-part series loosely based on the classic elements, water, earth, fire and air.

Previous Previous post: Don’t judge a rock by its cover
Next Next post: To beef or not to beef