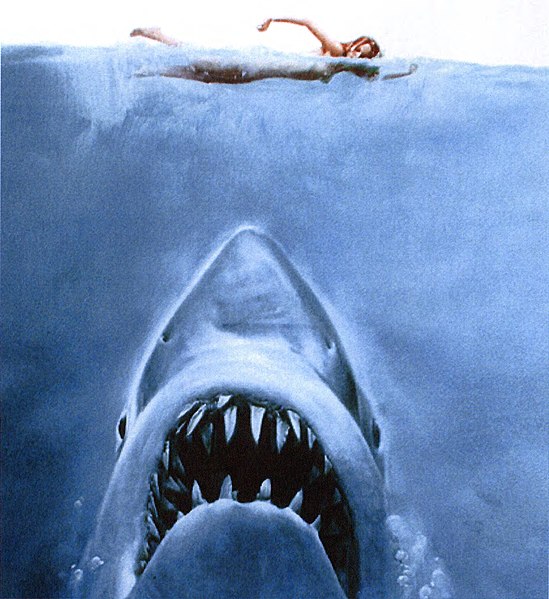 The iconic movie that gave its audience nightmares for days, Jaws has shaped a generation of people to fear. People were confronted with a terrifying monster that roamed the deep and vast ocean. Jaws reached into a fear that everyone didn’t know they had.

It’s been over 40 years since Jaws hit cinemas around the world. Even though this was a generation before myself, the fear of our oceans top predator has never dissipated. As a swim teacher, often my kids will spend their summers going on holidays with their families. In such a sun-loving country, the beach is always a frequent destination, whether it local or abroad. Before my students head off on holidays, I like to run through some quick beach safety, as this is often overlooked in a lot of swim classes. Guaranteed, almost every class I run through with this they will get eaten by a shark if they go to the beach.

So why does Jaws still have such a profound effect on our rationalisation? Especially when shark related attacks, are not that common. In Australia, according to the Toronga Conservation Society Australia, since 1791, there have been a total of 703 unprovoked shark attacks. Out of these attacks, only 186 were fatal. On average globally, sharks kill 10 people annually, this was illustrated well by Good Magazine in 2015 comparing The Most Deadliest Animal, (for those that want to know the highest was the mosquito, which kills 725,000 people every year, humans were second). So why do people have an inherent fear of sharks and not cows? When it’s been shown that cows kill more people annually than sharks.

Is fearing sharks really a problem though? It makes sense to avoid something which could cause you harm right? There is no point in even suggesting that sharks are harmless. Great White’s in particular can be several meters long and have over 300 serrated teeth, they can also smell a drop of blood from thousands of meters away. Great White’s are also responsible for the most unprovoked attacks in the world. In essence, they are the species which most reflects Jaws. Sounds pretty scary right?

Not all Sharks are the Same Not all sharks are Great White’s. It’s as simple as that. Yet Jaws put all sharks under the same category, as viscous blood thirsty monsters out to get us. Most species of sharks are shy, or don’t reside in areas where people populate. However, since the release of Jaws, every year humans have senselessly slaughtered millions of sharks, through culling, sports, or shark fin soup. Some populations are critically endangered with more than 90% of their initial numbers now depleted. Any abnormal number of attacks brings up the debate of a shark cull, without understanding the implications of destroying their numbers even more. Only now are we getting better at understanding the importance of sharks in our environment and how unrealistic it is for them to intentionally hunt us down and kill us.

Previous Previous post: Can virtual reality contribute to social isolation of the elderly?
Next Next post: The Quest for the Quickest Queue