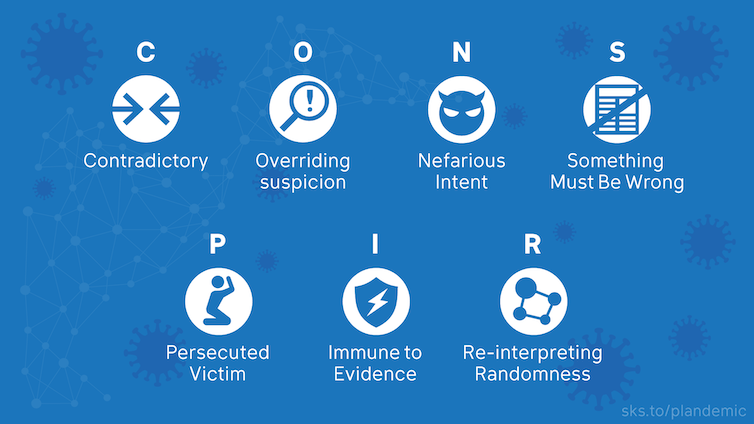 You can find a brief overview of conspiracy theories here

Across the social landscape of ideas, science operates to provide explanations about what is unknown. To do so it must sometimes contest with information from competing institutions such as political or religious organisations. Often these competing ideas share some common ground and can coexist within our collective understandings of the world. However, conspiracy theories are increasingly gaining foothold within this landscape, serving a dangerous alternative that is antithetical to years of scientific knowledge.

Science related conspiracy theories often capitalise on science’s relative inaccessibility to the general public or aversion to making claims of certainty. Examples of which include making spurious claims about an emerging disease or secret cures for deadly diseases, deceptively concealed courtesy of Big Pharma. The Covid-19 pandemic has popularised some of these conspiracy theories and this uptake has highlighted the potential dangers they pose to public health.

I’d like to preface this section by saying that healthy skepticism of corporations is not a conspiracy theory but a justified form of critical thinking and academic studies have shown that healthcare privatisation can be attributable to increased mortality rates and avoidable deaths.

The Big Pharma conspiracy theory however, suggests that pharmaceutical companies should be mistrusted as they have purportedly obscured a viable cure for cancer, dispensed non-effective or potentially harmful drugs, and even concocted widespread hoaxes, all in a bid to increase their profits. In 2020, the global revenue of the pharmaceutical sector was estimated to be insanely high at (US$) 1,265.2 TRILLION DOLLARS!

Assuming that Big Pharma had produced a cancer cure and obscured it from public knowledge, the truth would eventually be heard. According to University of Oxford academic David Robert Grimes, there is an equation that assesses the secrecy sustainability of a conspiracy theory. Because pharmaceutical research and development of drugs requires the involvement of at least hundreds of people, the ability to maintain a secret cure for cancer is limited by the number of people who necessarily know of it’s existence. Grimes estimated about 714,000 people would be involved in such a conspiracy and would therefore be uncovered within 3.17 years. As the duration of secrecy of a suggested conspiracy increases, the number of conspirators decreases exponentially with a maximum limit of 125 people needing to be maintained to prevent a century-long conspiracy from becoming widespread.

Proponents of the Big Pharma conspiracy may have ulterior motives, instead advocating the use of alternative medicine as trustworthy because it may offer a natural remedy that has not become impure because of “chemicals”. This phenomenon, known as chemonoia, heightens suspicion around lab synthesised drugs and can be exploited by those with influence in the so-called wellness community.

Operating predominantly online, wellness influencers can use their positions on social media to advocate for or advertise almost anything, giving rise to what has been called the conspiritualist movement. Between the anti-vaccine yoga practitioners and oil-slinging nazi scum, those in the wellness sphere are exposed to a legion of affluent, charismatic, and photogenic personalities bearing promises of healthiness. In these spaces, it is only conventional science that is questioned.

Legitimate concerns exist about the profit-oriented and results-focused nature of pharmaceutical corporations, and I fear that the more extreme conspiritualists are too far gone to ever even begrudgingly accept pharmaceutical treatments. Their adopted lifestyles and belief systems are steeped in misinformation and pseudoscience and social media allows people to become immersed in closed-off spaces, oblivious to other perspectives, particularly when these communities are defined more by their opposition to something (e.g. laboratory synthesised medicines) than any single defining commonality. Perhaps only complete transparency and abolition of a market economy for medicines will ever be enough to gain the wholesale support of the population.

5 Responses to “The Big Pharma Conspiracy”