Protecting Australian Women from American Jazz: The Hidden Aim of the 1927 Tariff Inquiry

The 1927 Tariff Board inquiry into the import duty on gramophone records coming into Australia was about more than industry protection. In fact the piano roll industry, which might be expected to be the one most concerned about the impact of imported records, wasn’t particularly worried. But others were.

Henry Reese, SHAPS PhD graduate, explores in this article republished from The Conversation.

In the 1927 Tariff Board inquiry, a small group of wealthy white men laid bare their prejudices regarding the gender, class and aesthetic tastes of the Australian public. The bottom line: the Australian consumer, typically regarded as female, could not be trusted with mass culture.

American jazz music was an agent of cultural and musical decline. It certainly didn’t live up to the standards of the musical establishment. It belonged to the modern department store, that emerging site of consumerism and commercialisation.

Australia was awash with recorded music

By 1925, mechanically reproduced music was ubiquitous.

To walk down the street was to navigate a diverse and complex soundscape, completely different to a generation earlier.The local trade estimated that more than one million gramophones had been sold in Australia. That’s roughly one for every three households.

Soldier-settlers doing it tough on the land, glitzy bohemians in city dancehalls, working families flocking to the expanding suburbs, Aboriginal people resisting colonialism on missions and reserves – the gramophone was ubiquitous.

A common sight on the streets of Melbourne was Amy Williams, a widowed mother who busked with her gramophone on the steps of St Paul’s Cathedral.

She became a cause célèbre in 1927. I told her story in a recent podcast.

Australia was host to a bustling and nationally integrated recording trade.

By 1927, the country boasted four state-of-the-art record factories. They were owned by the biggest players in the global industry: the multinationals HMV, Columbia, Brunswick and Vocalion.

Their products were sold by a nationwide network of record dealers. Some 70% of the records sold in Australia were manufactured in Australia. 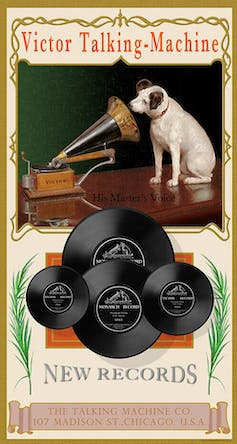 Politically, those years were defined by conservative government and a focus on national reinvigoration after the horrors of war. The catchcry was “men, money and markets”.

‘Men’ referred to the need for increased migration to provide workers, ‘money’ to the funds that would be needed to finance development, and ‘markets’ to the countries that would have to be persuaded to buy Australia’s exports, especially minerals, wool and wheat.

It was an environment in which business elites took on the role of tastemakers.

Australia’s 1920s were anything but cocktails and the Charleston – our jazz age was muted. The Depression lay around the corner. It was an anxious and uncertain time, and society was deeply riven along lines of gender, race and class.

The new process of electrical recording had led to an explosion in variety.

In response, the major manufacturers successfully petitioned the Tariff Board for an increase in the import tariff on gramophone records. The entire gramophone fraternity gathered to stress its national importance.

The transcripts of the Tariff Board inquiry read like a courtroom drama.

The Board was made up of prominent businessmen tasked with advising on industry protection.

In reading the transcripts I discovered they had strong aesthetic opinions too.

“Are you afraid that to allow these cheap records in is going to deprave the musical taste of the people?”

Brookes wanted records to be expensive enough not to lower musical taste, but not so expensive that they might “put up the price of classical music, such as Beethoven symphonies”.

A record retailer presented him with this deeply sexist scenario:

“A woman goes into a shop to buy dish clothes or towels, and she sees these records, and sees that they are cheap, and wastes her husband’s money by buying them although she really does not want them. That is how half of these cheap American records are sold.”

“For the sake of the husbands, wouldn’t it be better if these records were kept out of Australia?”

The implication was that the typical (female) consumer had only a shallow and passive relationship to music. She needed guidance from elites.

A music seller at the flashy Myer Emporium on Melbourne’s Bourke Street claimed there were “two distinct classes of people buying records” at his store:

“One is the regular record buyer at four shillings and better prices … the better class of music, and the other class is the one who wants and will buy only a cheap record.”

In case the distinctions weren’t clear enough, he said the two “classes” of records at Myer were physically segregated by a glass partition, so that genteel shoppers wouldn’t be corrupted by rambunctious jazz lovers.

Ultimately, the Tariff Board inquiry was a foregone conclusion. The tariff increase was carried into law in early 1928, and imports of records plummeted. The big four manufacturers further entrenched their hold on the Australian market.

But people still listened to jazz in their thousands.

This article is republished from The Conversation under a Creative Commons license. Read the original article.